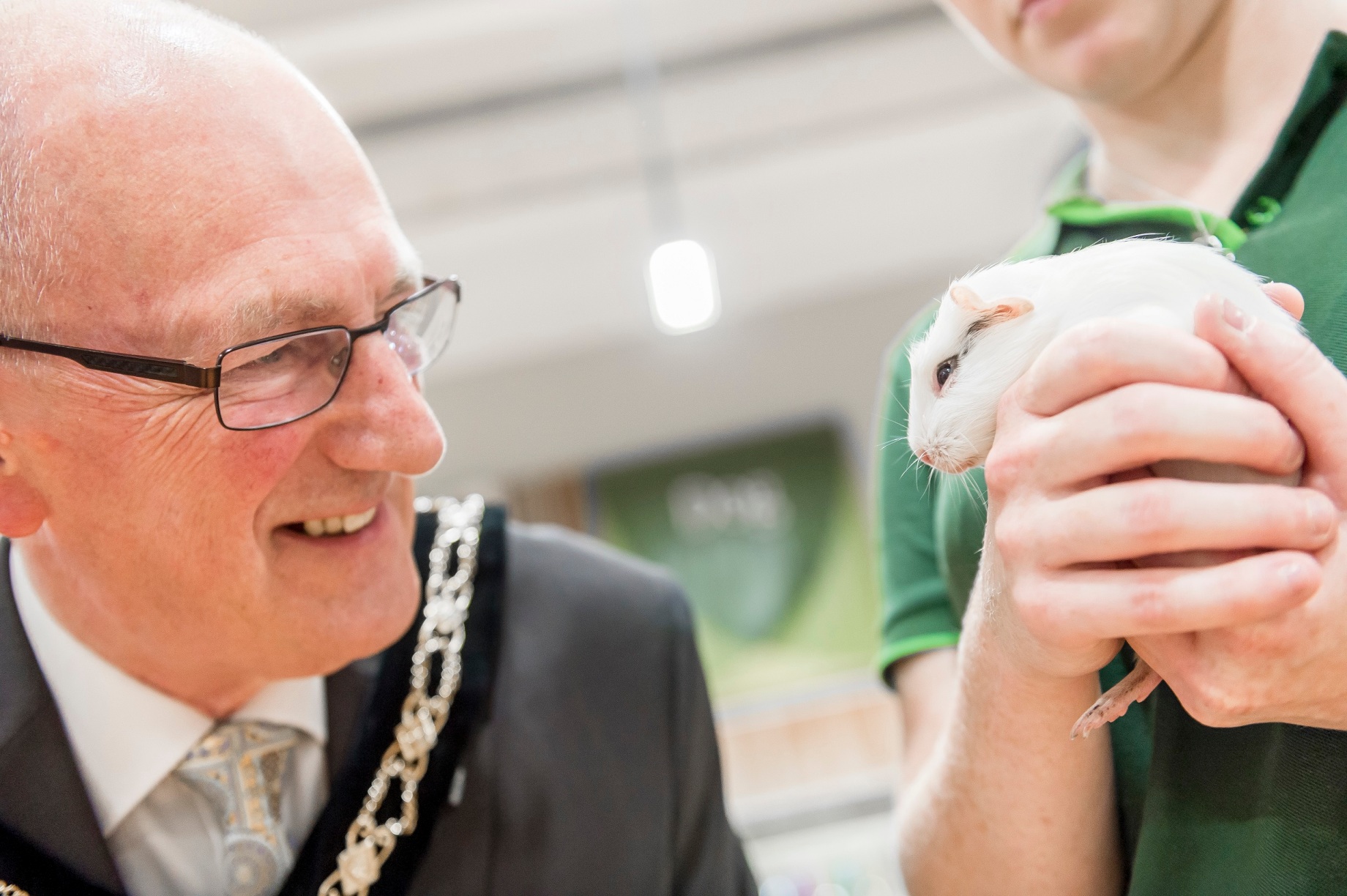 I’ve been meaning to compile this post for about a year now, but just never got round to it. Oops.

Most of what I do involves making marks on paper and hoping those marks then turn into something aesthetically pleasing; however sometimes I get asked to do other creative things – like last year when I was commissioned to refurbish the collar of the Mayor of Broxtowe’s solid gold chain (gulp).

This is how it happened. I was working in a friend’s framing shop — I’ll give him a quick plug: Tobi Pictures and Framing, one of the best framing shops in the country: friendly, qualified, knowledgeable staff and a wide range of mount cards and mouldings to choose from. If you’re in the area, or you’re miles away but want something peculiar or unusual framed, then that’s the place to go. I no longer work there. I’m not on a retainer. They’re just really good at what they do — when two people came in enquiring whether we knew of anywhere that offered the refurbishment service they needed. Barney, the boss, was about to say no, sorry, he couldn’t think of anywhere when I piped up. So we discussed what was wanted, the time scale, price, and all that sort of thing, and that was that. The job was mine.

This is what the Mayor’s chain looked like in its display/travel case (the smaller one with the oval medallion is the Mayoress’s chain).

And here are the 40th Mayor, Councillor Graham Harvey, and his Mayoress (left) wearing them shortly before I got my hands on them.

It doesn’t look too bad from a distance, does it? But up close it was terribly worn and faded. 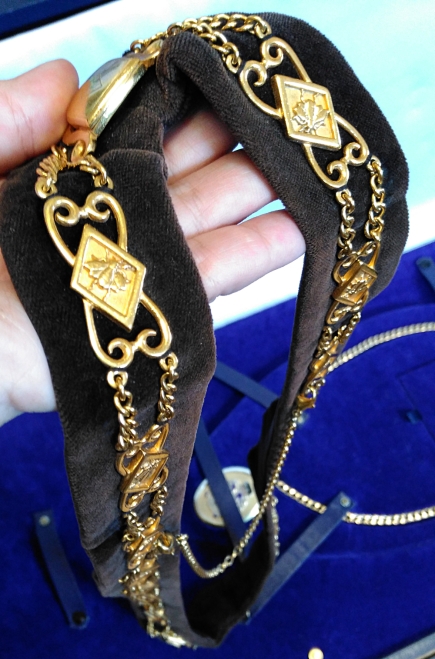 Now, I’ve done a lot of sewing over the years so I wasn’t daunted by the task itself, but being entrusted with anything quite so valuable was just a tad unnerving. And on top of that, I suddenly discovered that heavy black cotton or silk velvet had ceased to be something most fabric shops carry. Back in my gothy days in the nineties, velvet was everywhere, but 25 years on and suddenly it’s as rare as hen’s teeth. There’s plenty of thin, synthetic, stretchy stuff, but not the proper posh fabric, befitting a mayoral chain. One of the large department stores in Nottingham said they could order some in for me – but they had a minimum order of 2 metres (I needed half) and at a price of something like £140. And no guarantee it’d arrive in time for me to do the work and return it on the agreed day. I’d somewhat optimistically given Michelle and Sarah, the people from the Mayor’s office, an all-inclusive price and I didn’t relish having to revise either that or the deadline. They were both lovely, as was the Mayor, but I just hate not being able to fulfil a promise or having to alter a deadline. I tried Derby – still no joy. However, quite serendipitously, I happened to be spending a few days in the South West. Taunton was equally bereft of plush, black velvet. It seemed futile. But then, when I’d all but abandoned hope, I manged to stumble across just what was needed in a small shop in Exeter. Phew! Panic over.

In the end, I got the lovely, thick luxurious ‘Exeter’ velvet for the top of the collar, and some with a shallower pile for the underside from Nottingham (thick-pile velvet has a habit of ‘walking’ and the Mayor would want his collar to stay where he’d put it).

And after that, it was plain sailing.

I started by drawing a template (on the back of an old cereal box). 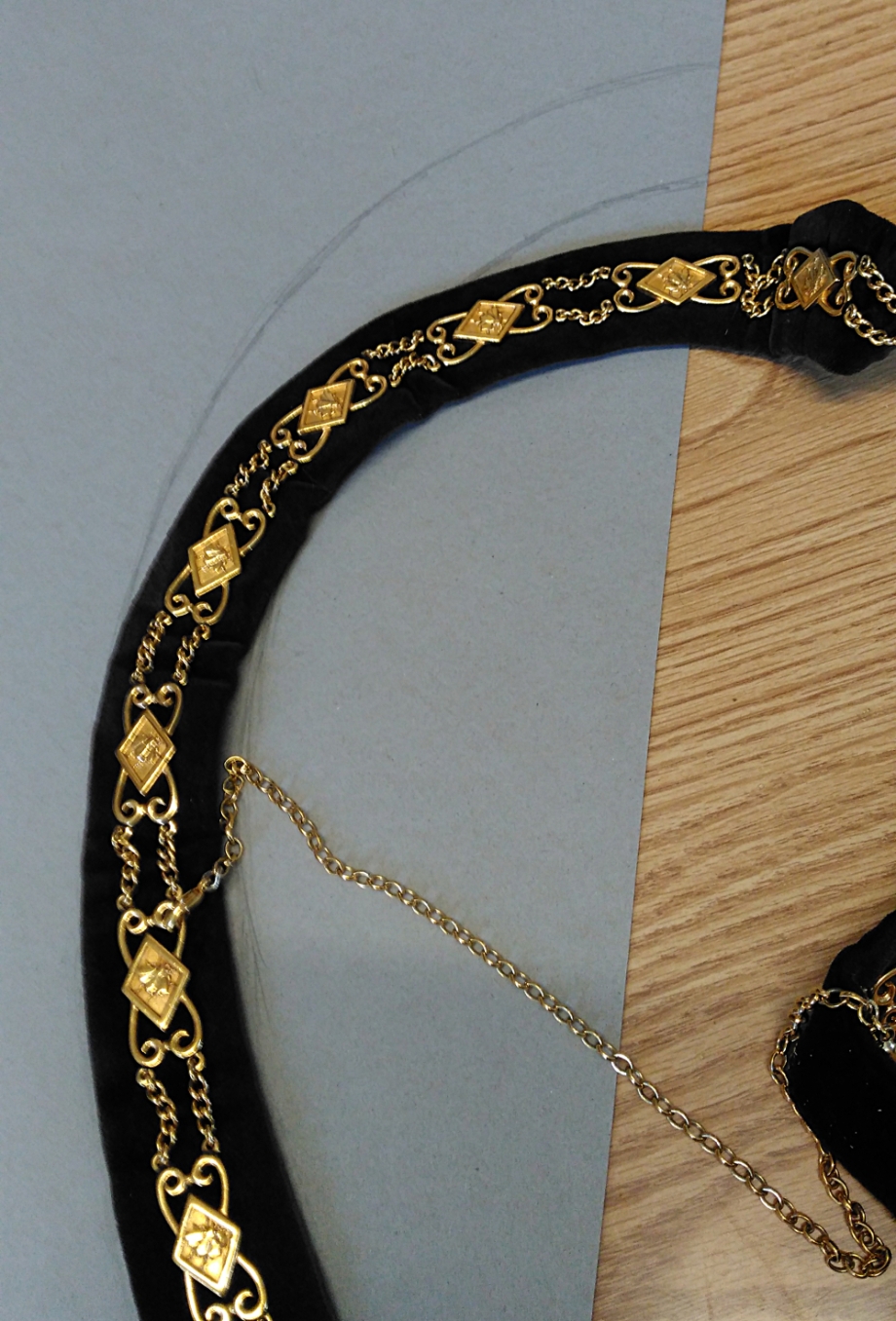 I just drew round half the collar and then cut a mirror image to ensure symmetry.

I decided, for aesthetic reasons, to make the template, and the new collar, a tiny bit wider than the old one.

Remember how the old collar didn’t look too bad from a distance? Look how faded it was close-up! This is after I’d taken the chain off. 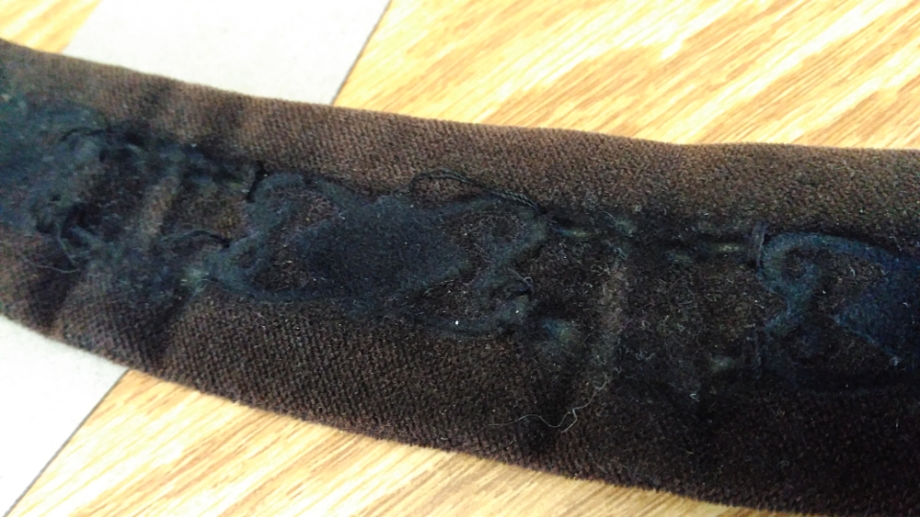 And this is the temporarily unattached chain.

The next step was to cut out the lining material – that chain is heavy so its collar needs to be quite substantial to support it. 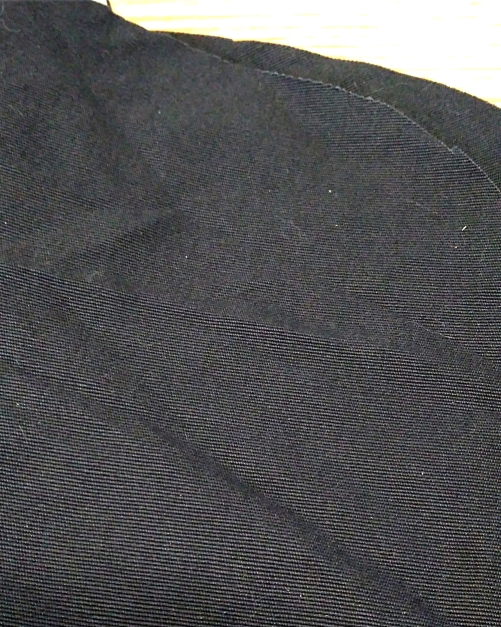 Here’s the chain on the lining on the template. I’m happy with the size and shape.

I cut the lining material to the same size as the template, but the velvet outer layer needed to be cut a little larger to allow for having the raw edges turned under.

I tacked the raw edges to the lining, making cutting out small Vs to ease the fit around the curved sides. 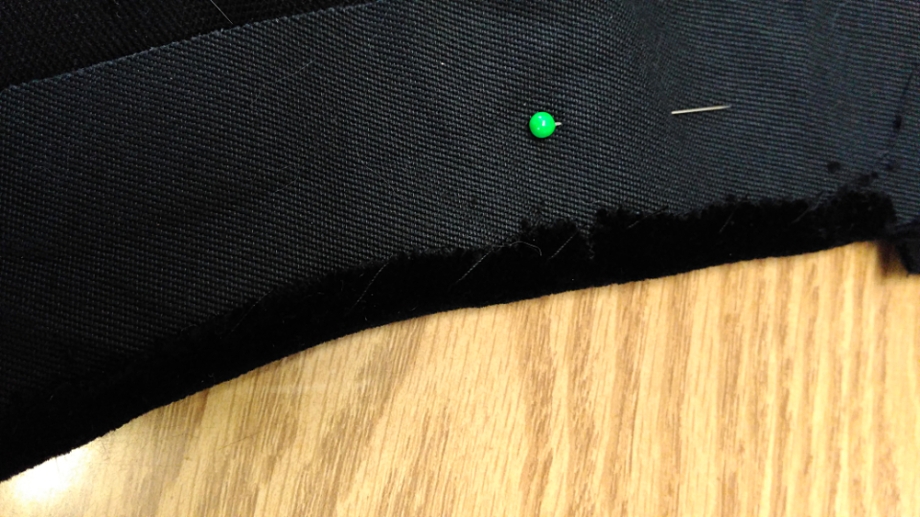 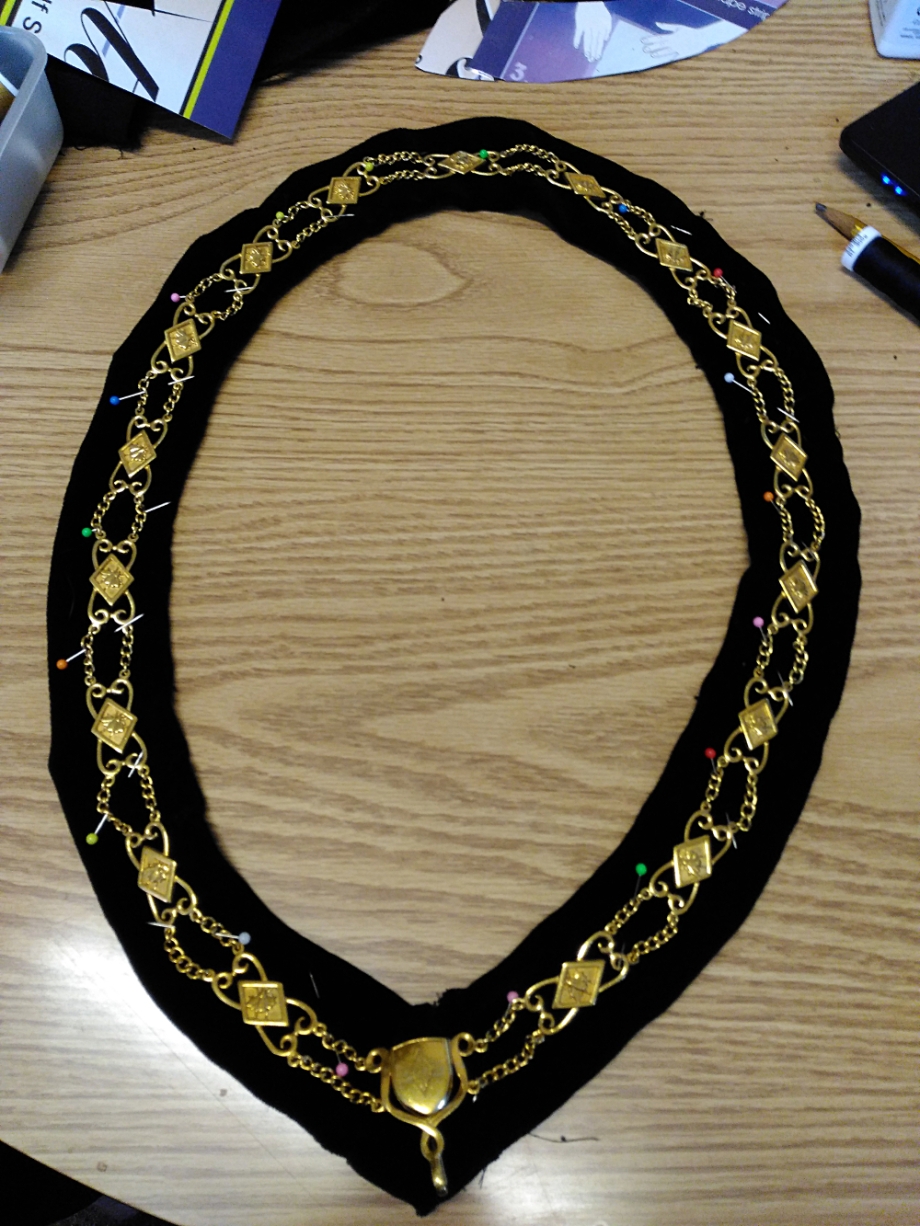 … and the chain stitched in place. 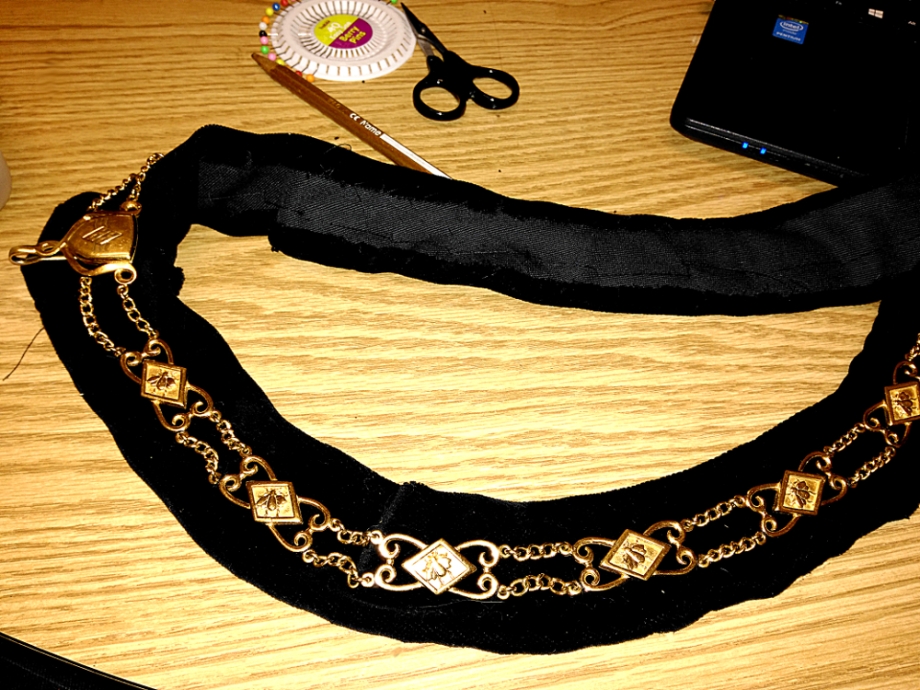 I then cut out another collar shape from the thinner velvet, tacked the raw edges under, and pinned it to the collar front and lining. 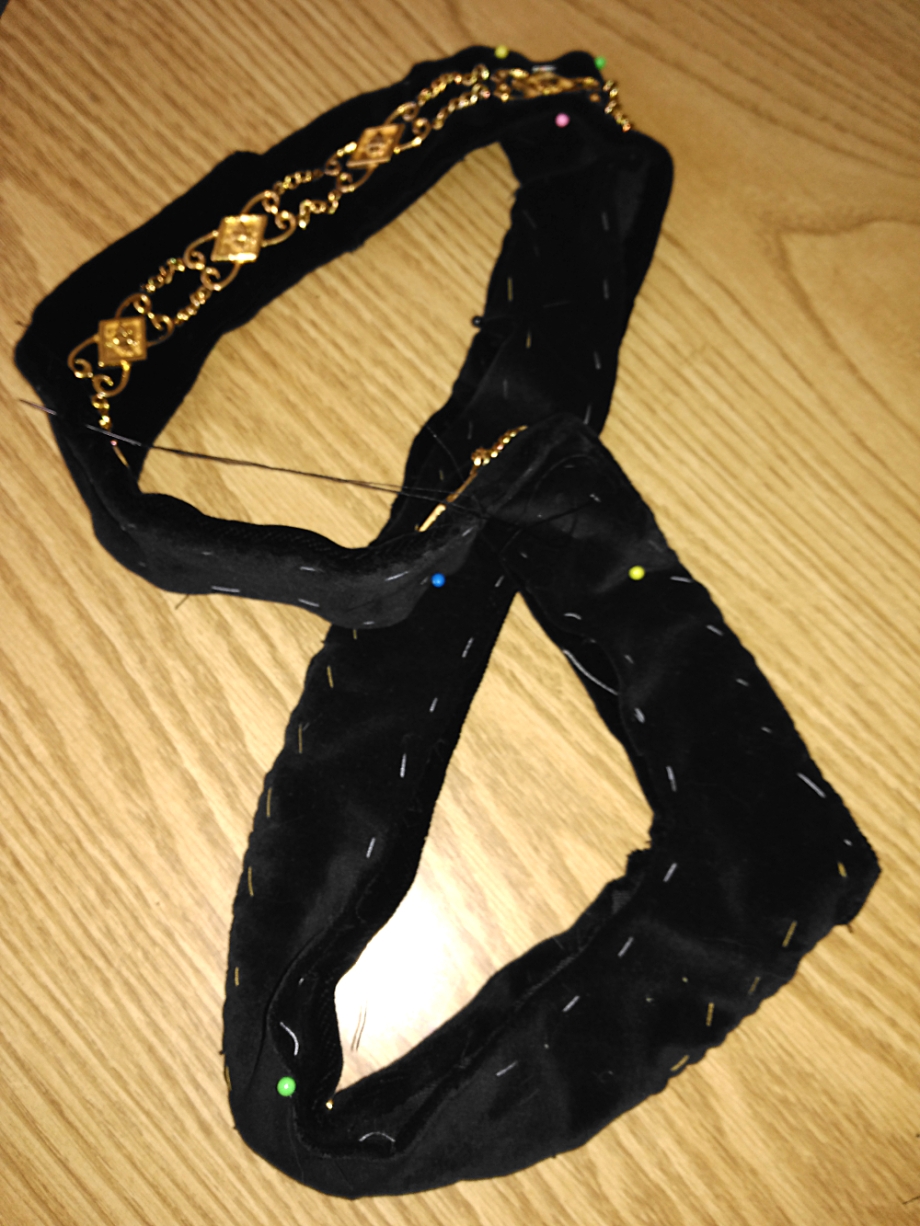 All that remained was to neatly hem-stitch both pieces together.

As you can see here, I also added an extra layer of velvet at the centre front of the collar to protect the Mayor’s clothes from being rubbed by the ring at the bottom of the shield.

Another task I’d been asked to undertake was to somehow put some velvet on the rear of the Mayoress’s medallion as this was rough and inclined to catch and pull whatever she was wearing. 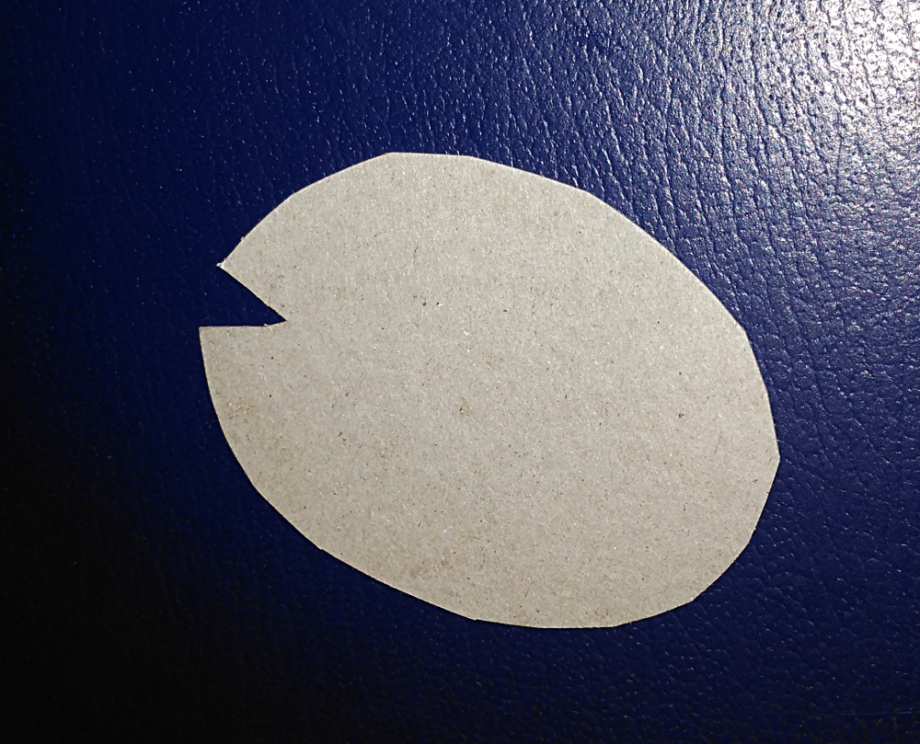 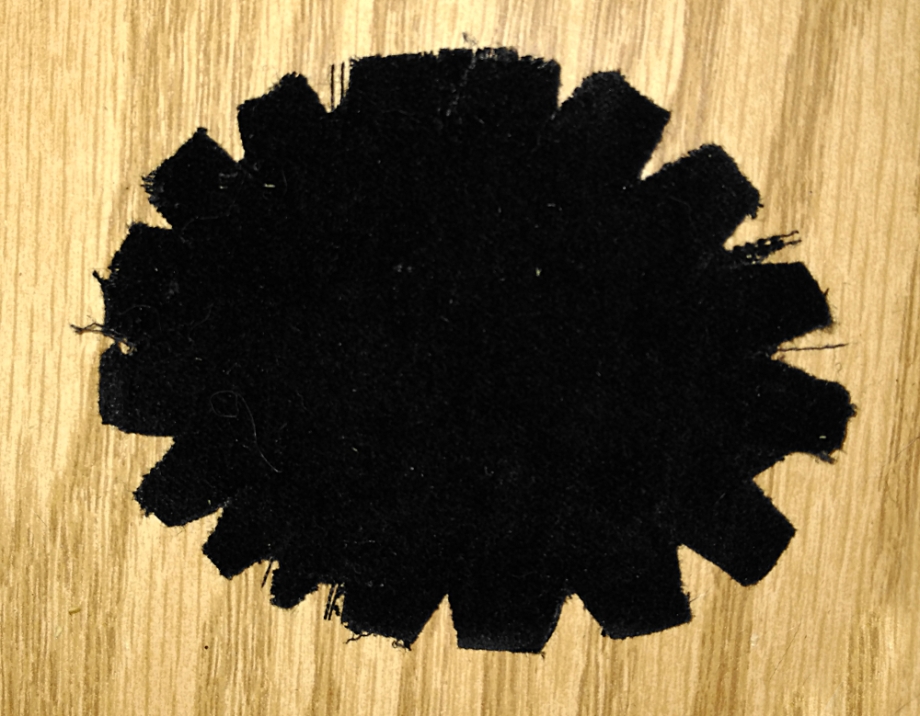 … and, finally, a hemmed velvet oval stuck, with a contact adhesive that was both suitable for fabric and undamaging for precious metal, on the back of the medallion. 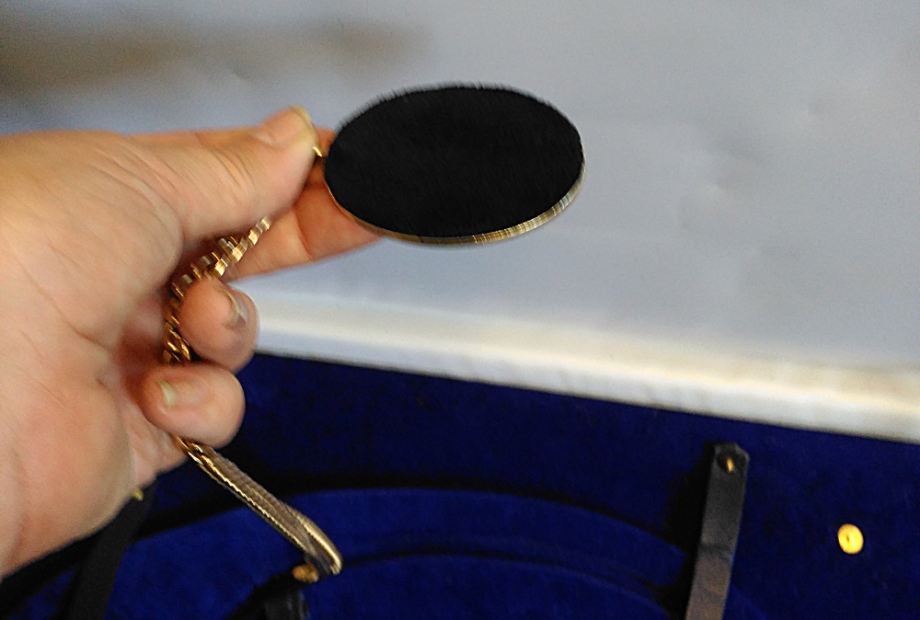 And finally we have the Mayor’s chain, resplendent on its new collar, and the velvet-backed Mayoress’s medallion and chain safely back in their display/travel case, ready to be collected by the Mayor himself. (He said they looked great!) 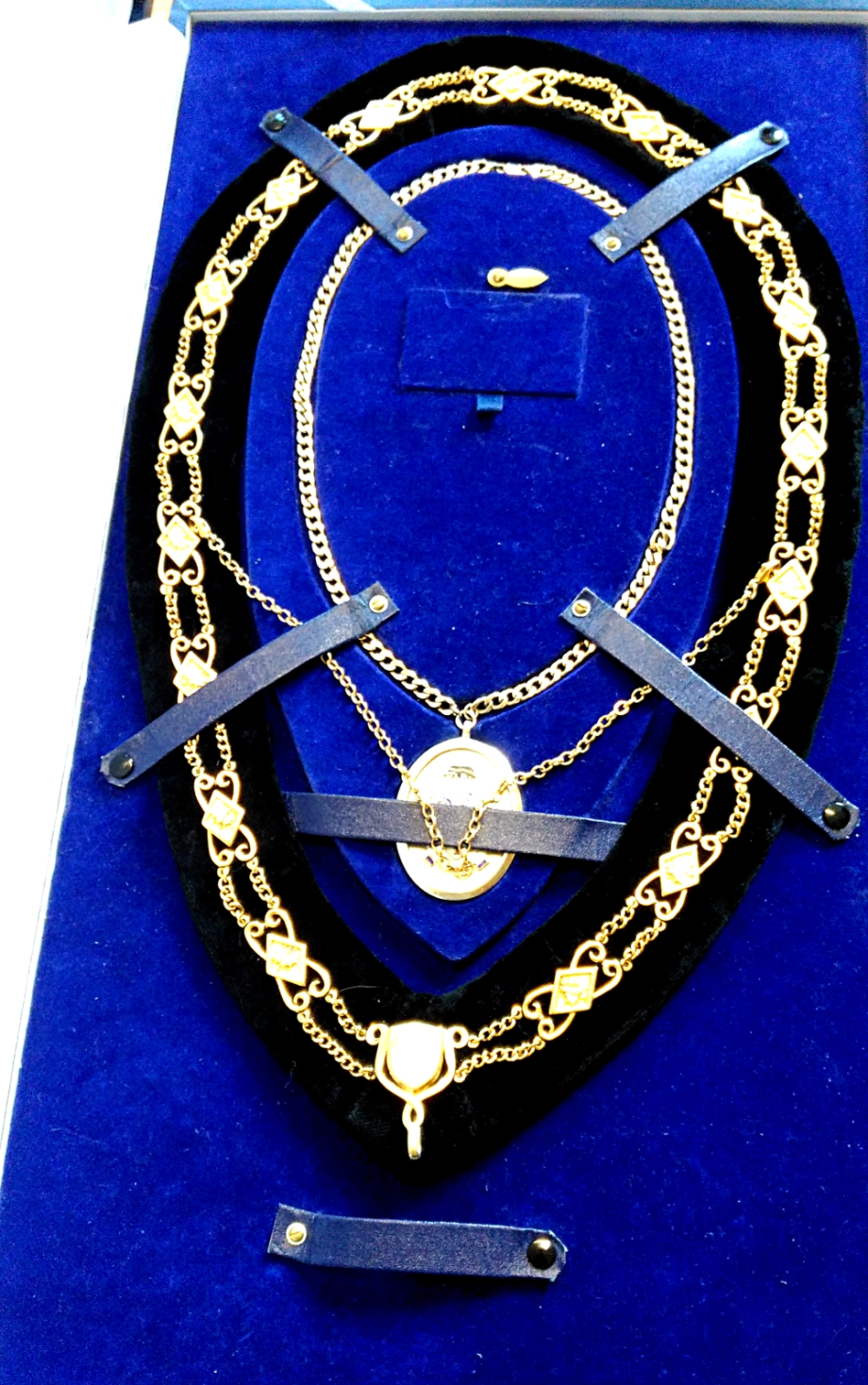 Here you can see the difference between the shabby, faded old collar, and the plush, black new one. Notice, too, how the new one is a little wider than the old. 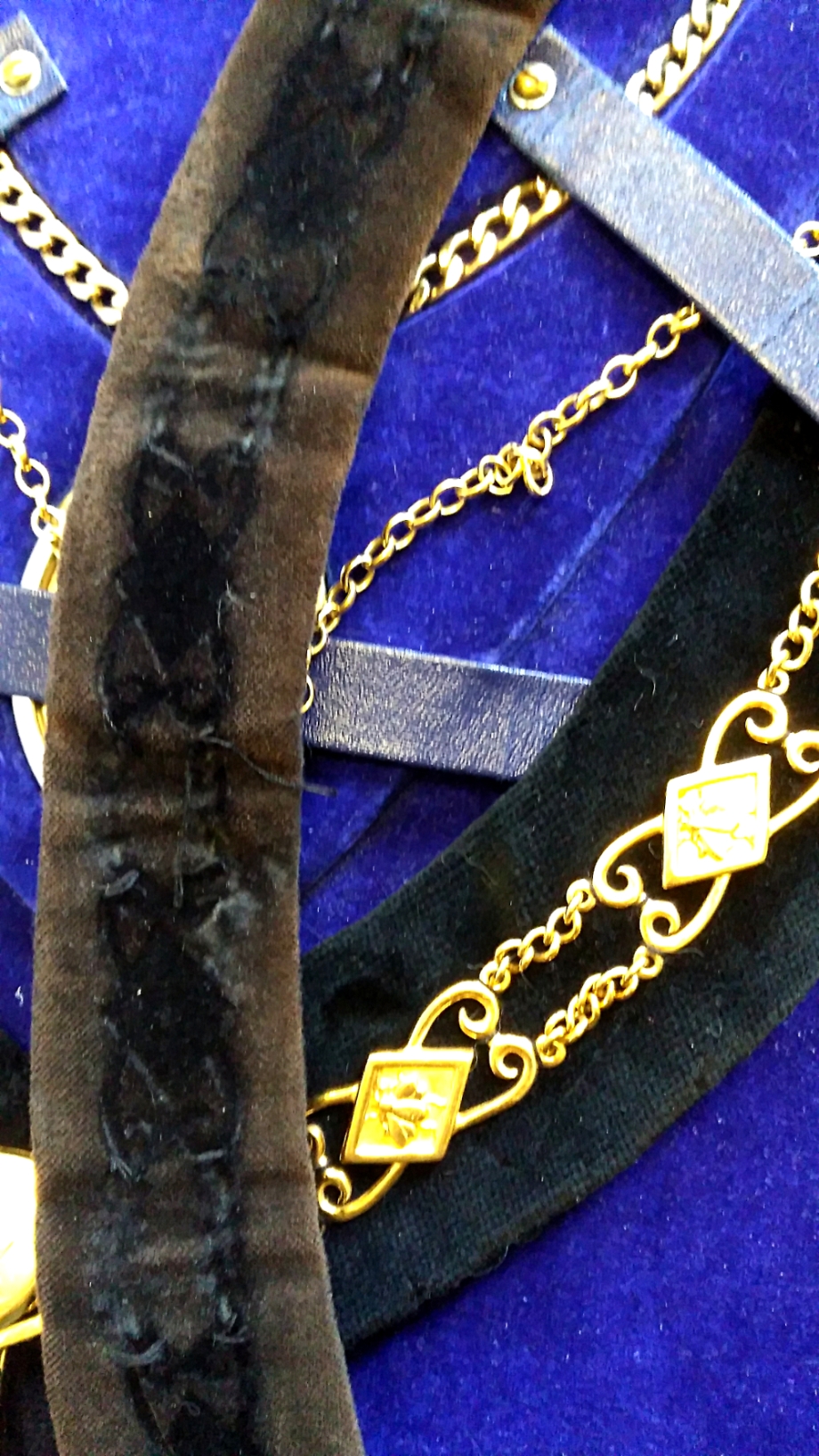 And here’s Councillor Harvey wearing it.

Isn’t it black and lovely?

Broxtowe mayors hold the position for a year. Since May 2017, the role has been filled by Councillor Halimah Khaled MBE, who received the chain from Mr Harvey and can be seen wearing it here.

4 comments on “A Mayoral make-over”